Pikes Peak – From the Ground Up

Hi DiRT fans!  I’m John Barnes, Experienced Level Designer. On DiRT Rally, besides being responsible for building the Monte Carlo stages, I also got to build what is probably the most requested track in Codemasters’ history: Pikes Peak!

For those who don’t know, Pikes Peak is a track set in the stunning Rocky Mountains of Colorado.

Each year, a Hillclimb event is run, playing host to such luminaries of motorsport as Rod Millen, Nobuhiro ‘Monster’ Tajima, Stig Blomqvist, and Sebastien Loeb, and numerous other new and veteran racers. They each push the limits of themselves and their machines to try to beat the mountain, developing ever more powerful engines and lighter vehicles. Many have tried to best it, many have failed. A rare few have earned the right to call themselves Champion of its treacherous curves.

Recently, some controversy has surrounded the decision to re-surface the road completely in tarmac, with some claiming that the essence of the race has been lost. Whatever your stance on this issue, you’ll be able to test which is best in the DiRT Rally Pikes Peak Update, as it features both a full tarmac and the half- gravel variant.

As far as Hillclimb events go, Pikes Peak is arguably the most famous, so it was a no-brainer to include it in DiRT Rally, now more accurately modelled than ever!

This article aims to give you a bit of an insight into the processes behind track research and construction here at Codies.

Before starting work on any track, a great deal of research is done. To start, we gather preliminary imagery and track data, usually from the Internet and reference books, picking out key areas to research. Using this as a guide, a trip is planned, taking in the main track area, and any additional locations which we feel might be useful on the current, or even future, projects. The itinerary for this trip is carefully timed, to give us the best chance of collecting every possible piece of reference.

The Pikes Peak trip was timed to coincide with the Hillclimb event, with one day before and one day after in which to perform research, leaving the race-day itself to meet the teams and film the event.

Gathering all the necessary data in three days is always difficult, but even more so when you have to walk along Pikes Peak. At the higher altitudes, the air becomes thin, and it’s harder to breathe at even a slow walking pace. There was even an electrical storm to contend with; in hindsight, it probably wasn’t the smartest decision to stay outside carrying camera equipment during this storm!

Although it might sound great to be able to visit far-flung places on work time and money, a research trip is anything but a holiday; it requires a lot of planning and effort. On a three or four day trip, the team will be expected to cover a lot of miles. It’s an up before dawn, turbo breakfast, bleary-eyed drive through the night, kind of trip.

But what exactly is the end result?

Mostly, photos. Lots and lots of photos. A quick check of the data on the server shows almost 11,000 photographs which were taken during the three-day Pikes Peak trip. There is also GPS data, numerous videos, and even audio recordings of background ambient sounds.

We start by driving along the route, video-recording as we go. Despite our research trips usually taking place at some of the world’s best rally tracks and race circuits, we must try to drive at a leisurely 10-15 mph to get the clearest, least shaky footage possible. Of course, when we’re not filming, well!  Let’s just say that there are a few hire cars with slightly more race miles on the clock than there were before I started…

As well as the video, one team member will collect ‘section photography’: eight pictures, taken at 45o intervals, creating a full 360o panorama, every ten metres or so along the centre of the road or track. As you might imagine, by walking and stopping every ten metres, it can take a long time to collect all the photography for a route, which can be at least nine or ten kilometres. It’s usual to spend an entire day of constant walking to collect the required amount of research.

This is later used as both a guide when comparing the in-progress track to the real-life version, and also as a guide for road camber, widths, bumps, and even object placement.

While this is happening, the other members of the team will take pictures of everything else; houses, trees, rocks, gravel, tarmac, bushes, flowers, even litter-bins. The basic rule is; if it’s there, photograph it.

We have had some funny looks from other spectators as the cars race past and we’re all taking pictures of a chunky rock that has been kicked up, or some random flower!

We will also try to collect audio recordings of the ambient sounds in a location, even going so far as to pop a balloon to record how the sound echoes back.

Personnel on a trip will usually be a mixture of Level Designers and Artists. As the two departments require different types of research, it makes sense to have somebody there to double-check that we’re collecting the right imagery.

Level Design reference differs from Art reference in that it focuses more on the track and the way it interacts with the environment, rather than the isolated environment objects.

For example, Level Design reference might show a house next to the road, but Art reference will have images of that house from every possible angle, close-up images of features such as windows, doors, even the way the roof sits on the top and the way the grass sits around the base, so that the house you see in-game will be as accurate as possible to the house we see in the field.

How is it used?

Once we’re back in Blighty and have collated all the research data, the track building can commence. Using everything we’ve collected we will start by creating a 2D top-down path using 3D Studio Max; this is carefully matched to the maps of the road we want to build.

A basic mesh is then generated from this path, and we start to add the gradient of the route, at first roughly matching the reference, and then fine-tuning to achieve a perfect match. This usually takes a couple of days to a week, but Pikes Peak took around two weeks to make sure that the height was accurate.

Once the overall gradient has been applied, each corner is studied to assess how much camber should be applied, whether there are any bumps/dips and also how much run-off there should be. This is then applied to the track mesh and rigorously play-tested. On top of this, we apply a noise pass and subtle undulation to mimic the roughness of the real surface.

The final stage is to apply high-quality tile pieces to the 2D path, which provide a good idea of the track-edge shapes and heights, textures and surface types that will be in the final track. Until the art team can work their magic, the track at this stage will likely have rock-banks which disappear or don’t match the previous edge. There may even be holes in the terrain!  These tiles are also tweaked to match the images from the research trip.

Junctions are added where necessary, and then rocks and track-side objects will be placed. Next, trees are added. The track is now ready for review. Level Design play-test the track before presenting it to the Game Design team. After they play the track, any feedback they have will be carried out, before a second review. All being well, the Game Design team will sign-off the track. There may be some small changes required even after second review, in which case the process continues until all parties are satisfied.

Once the Level Design team and the Game Design team are happy with the track, it is passed to the Art team, and they begin the process of taking my sub-par artwork and transforming it into the beautiful tracks that the player will see. No small task!

The final track will be returned to us in time to add replay sequences, reset-zones, crowd, and to tidy everything up. And of course, so we can have a cheeky play every now and then! 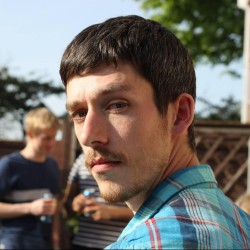 Born at an early age, John quickly learned to walk and talk; skills which have proven immensely useful in his everyday life. When not creating race tracks, he will be climbing, drinking fine single-malt whisky, and adding small print to his social contract.

View all posts by John Barnes