Getting Fired Up For Loheac

After a long journey from the north of England to Portsmouth, we crossed the English Channel and touched down in France, ready for round eight of the FIA World Rallycross.

We had a few tests to run and spent Wednesday at Mayenne. For my teammate Andy this was more of a shakedown and a few set up changes, for me I had to see if I could still handle a six hundred horsepower beast. I am pleased to say that after eight laps I was firmly back in the saddle and loving every minute of it! I calmed myself down after a while before starting the hard work and getting back into the test.

The Albatec Racing guys are great and after trying out various set ups, I felt we had something that with a few more subtle changes at Loheac, could get us a few extra seconds.

Today we’re finally here and settled at the track; the guys are working hard re-prepping the cars, whilst we set up the Albatec hospitality area. The sun is shining, there’s that smell of motor oil in the air, I can hear tools clanging away in the distance and there’s nowhere else I’d rather be right now.

If you want to keep in the loop with all the action from the weekend you can follow me on Twitter @David_Binks, the great guys at @AlbatecRacing and @DiRTgame will posting up all the news and action from the track.  For the cherry on top you’ll also be able to watch the race live and online right here. 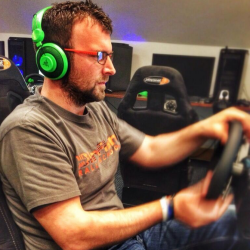