This is our GameJam

This week sees the start of our second GameJam of the year, a full five day period dedicated to giving our team the freedom to create whatever new game concepts and technical developments they choose in a process which complements, but is apart from, our normal focus on creating what we hope are some of the finest racing games in the world.

To kick this week off I’ve been asked to write down a few words, and whilst it’s been many years since I’ve blogged,  I hope I can give you an insight into why we believe so whole heartedly in GameJamming here at Codemasters, what our talent gets out of it, and why we’ll continue to dedicate 10 days a year to allowing our teams time to explore whatever concepts they want, with whomever they want.

For some years myself and other members of the studio management team have firmly believed in the power of self-directed work –in offering outlets for creative expression that are distinct from the daily routine.  We’ve all been inspired by the trailblazing companies that have gone before us, including some of the most inspirational and creative businesses in the world which have a culture that makes them a great place to work.  The list is long but Google, 3M, Ideo and Double Fine all come immediately to my mind.

Although the methodologies vary at each of these companies, the driving factors are the same – to refresh and revitalise talent allowing them to flex their collective muscles in new and creative ways, to engage and excite people and perhaps find the future break-out successes. We hope that everyone involved enjoys our GameJam and we are open to the best ideas that come out of the process to be realised within our games, or as games in themselves.

There’s no pressure on anyone to come up with the next big thing. However, we’re always open to ideas and are delighted with the creativity that lies within our studios. At Codies we’re determined to hire well and look after our people. We believe in the creative power of our developers and we also believe that given an outlet for innovation and invention they will find ways to far exceed our, and often their own, expectations. That’s why this week, we’re GameJamming.

Beliefs and dogma aside, to be honest the decision to actually dedicate a full week to our initial GameJam was far from easy.  You can quantify a week of lost production time – it’s far more difficult to quantify the unknown, and to a degree immeasurable, benefits of a GameJam.   Having made the jump, however, we would never go back.

Since the first GameJam in spring 2013, we’ve seen benefits that would have been hard to quantify in real-terms before the event, but became evident once the week was over.   There were some amazing concepts that were created during that first week, the best of which we’ll be looking to develop at some point in the future. Then there were the other benefits I’ve mentioned above, but it’s also been amazing to see some of our talent growing in confidence.  More junior and senior developers have experienced how much can be achieved in a very small space of time when given this kind of creative freedom; specialists have grown in range by trying their hands at being generalists; we’ve seen people learning more about the innate and varied capabilities of their team-mates, and enjoying collaborating with people they may not have worked with before.  Suffice it to say, the first GameJam was an enormous success for everyone within the studio.

This time around we’re trying something a little different, which we’ll talk more about as the week progresses.  Briefly, there are two incredible charitable organisations we have close relationships with: Special Effect and The Wellcome Trust, and this GameJam is a collaboration with those charitable foundations and their representatives.  Through a series of posts by members of our team who are jamming and other people involved in the organisation of the week, we hope to give you some insight about some of the things we’re getting up to.

In the meantime, good luck to all of our developers who are GameJamming this week and thank you for reading. 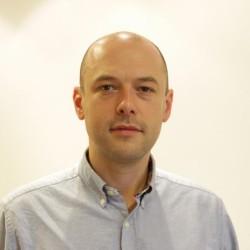 Julian runs the Southam Racing studio responsible for the DiRT and GRID games.

View all posts by Julian Widdows