The VFX of Yas Marina

For anyone who’s been to a motorsport event, one thing that is very clear is the sights, smells and atmosphere around the track. Something we pride ourselves on here at Codemasters is the ability to bring our tracks and environments to life.  Being able put the player in the event and make them feel that they are there, part of the event, is something we aim to do on all our racing titles.

GRID Autosport is no different and builds upon this with the clever use of visual effects. Heading to Yas Marina for a Drift event you’ll see lots of different elements around the track that may not be completely obvious at first, but really help to breathe life into what could otherwise be a very still environment. First of all there is heat haze.

As you sit on the starting line waiting for the lights to turn green, you’ll notice the distant horizon shimmering and distorting

As Yas Marina is situated in Abu Dhabi with average temperatures exceeding 31°C, adding heat haze was a must. As you sit on the starting line waiting for the lights to turn green, you’ll notice the distant horizon shimmering and distorting. This effect is achieved by generating particles all around the car. These particles have a distortion shader applied to them which bend and distort the light creating the heat haze effect. This same technique is also used on the car exhausts to create the sense of hot gasses being expelled.

The air space around Yas Marina in GRID Autosport can get quite exciting too. To the west of the circuit, you’ll see hot air balloons. Airliners take off from the nearby Abu Dhabi International Airport. Small business jets can be seen on their approach run to the airport bringing VIPs to the circuit. Marquees and fan areas have balloons that are let off into the air at the start of the event. If you look carefully, you can even see a parachute display team descending to the north of the circuit. All these small details help to create atmosphere and excitement around the track.

…we didn’t want a ‘one size fits all’ approach to tyre smoke, so we set about creating different FX for different events.

One of the biggest features in terms of Visual FX around Yas Marina (and other Drift routes) was the tyre smoke. For GRID Autosport, we didn’t want a ‘one size fits all’ approach to tyre smoke, so we set about creating different FX for different events.

Other racing events in the game still generate tyre smoke if the car is made to do so, but the Drift events push the tyre smoke even further to create the iconic look associated with such events.

Spinning your tyres on the start line will cause a burnout effect where the smoke gradually builds up until your tyres are really smoking. When drifting around corners in GRID Autosport, you’ll see thick billowing smoke pouring from the tyres and back of the car. Pieces of rubber (marbles) will be kicked up and thrown from the tyres when spinning the wheels and moving the car sideways.

With all this smoke, we needed to add something more. Something to give the sense that this is a smokey environment with the smell of burning rubber. Over the course of a Drift event, you’ll notice smoke building up in the corners and apexes of the track where cars have been drifting. On the first lap, there is no smoke in the corners as cars haven’t passed through yet, but on subsequent laps, the smoke buildup becomes more apparent.

This was achieved by placing several FX emitters around the corner sections. Once a car passes through these emitters they trigger the smoke FX in the area which the car has passed. A time delay is applied to the smoke so that it gradually builds up. By the time the player passes through the same point, lingering smoke is left from the previous drift, creating a believable atmosphere for the event.

GRID Autosport is full of these small details added through the use of VFX ranging from leaves falling from trees, pollen blowing in the breeze, construction workers welding structures and maybe…. just maybe, you can catch a sight of some wildlife. 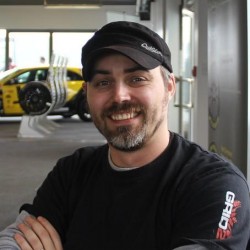 View all posts by Peter Clark